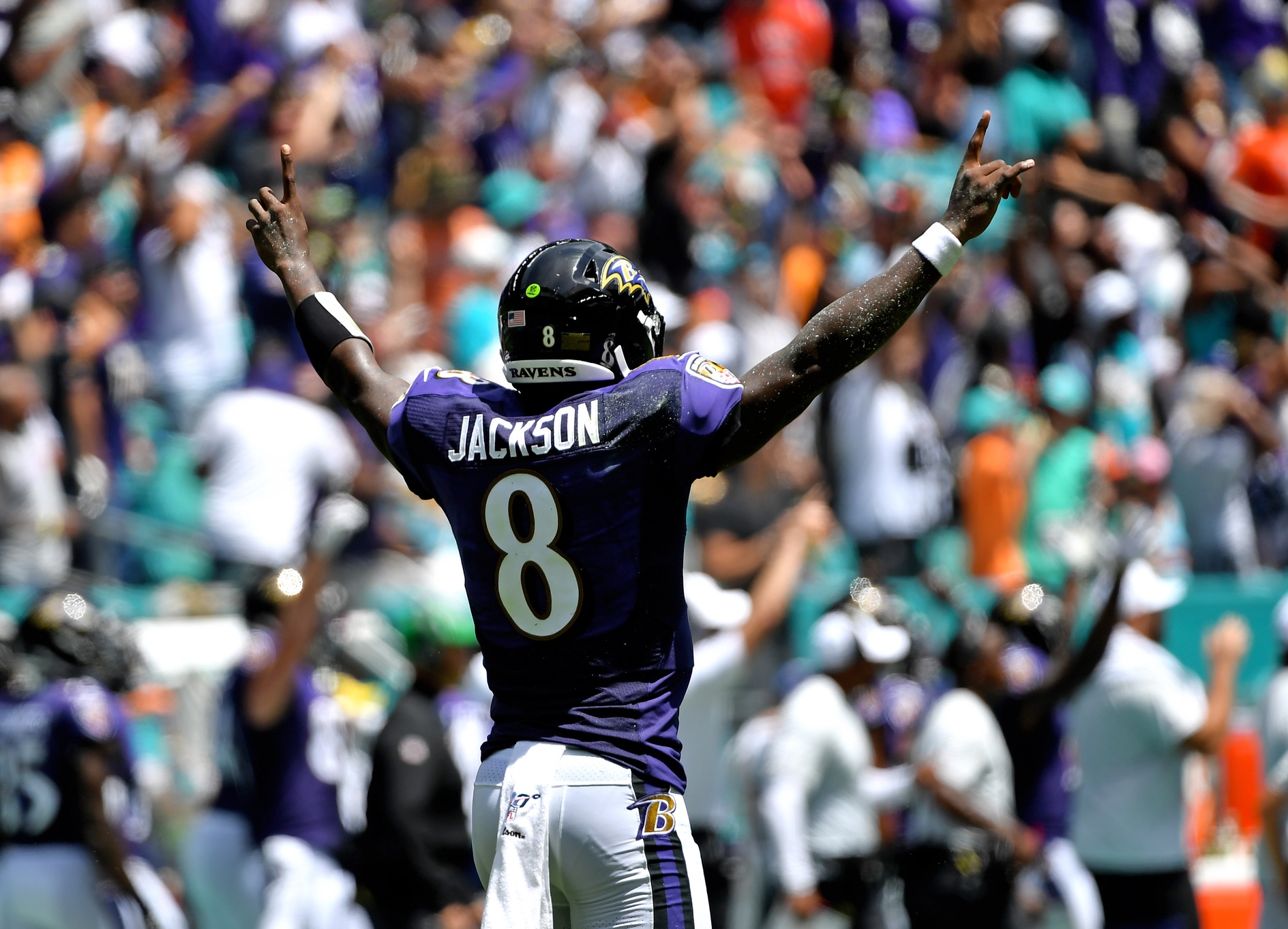 Expect pace and points aplenty as we line up our best Ravens Rams props for Monday Night Football.

These two teams combine for 68 snaps per game, the fourth-highest total of this week’s slate. Baltimore has been pushing the pace all year, with a 67.1 snaps-per-game average that ranks third. They’d likely still rank first if they hadn’t benched Lamar Jackson in blowouts in each of the last two weeks.

Sean McVay’s Rams have played slower this year (64.7 snaps/game, 13th) as he tries to hide Jared Goff, but they’ve been a pace-up team historically, and the Ravens are an offense that can easily force them into a faster pace than they’ve been running the last few weeks.

Summed up — this is the rare spot where we like some Overs. And that’s where we begin tonight with a look at Nick Boyle’s undervalued market, before checking in on the health and the matchup for electric rookie WR Marquise Brown.

We’re in the midst of another winning week at 11-5 on the offshore prop markets and 7-2 on the New Jersey markets, including a win on last night’s SNF pick. To get access to all our picks, join us here!

I’m wary of a trap here, especially as we know that playing TE overs on the road is a losing bet in the long run. But this number is surprisingly low given his recent production, figures that aren’t fluky at all when you look at the underlying numbers.

Boyle is best known as a blocking TE, but he’s so good at it that he rarely leaves the field these days, playing more than 75% of offensive snaps in three-straight games. He hasn’t even been under 60% snaps since September. 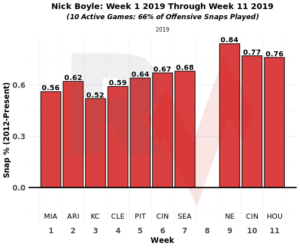 Despite doing his best work as a blocker, Boyle’s constant presence on the field has led to consistent if unspectacular target counts.

He’s secured 11 of 12 over the last three weeks of increased usage, and his 125 receiving yards in that stretch are the 10th-most at the position. It’s just 24 fewer yards than teammate Mark Andrews, whose yardage line is set at 52.5 tonight, 218% higher than our target mark of 16.5.

That kind of market discrepancy is unjustifiable when you consider than Andrews has just three more targets than in that stretch.

In all, Boyle has gone over 16.5 yards in five straight and seven of 10 on the year. 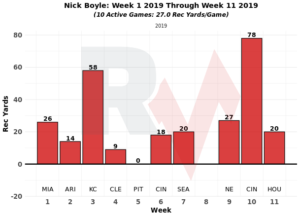 Add to the fact that this game rates to be the fastest of the week in terms of raw snaps, and the number is just too good to resist, especially when you consider it’s set higher at 18.5 yards at other books.

Speaking of lines that are off from the rest of the market, we’re getting a phenomenal price on Brown.

Brown hasn’t been 100% for several weeks now. He’s been reduced to a part-time player since returning from that ankle injury in Week 9, failing to eclipse 60% of offensive snaps in any of those games after doing so regularly earlier in the year. 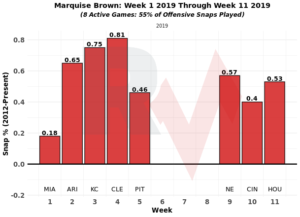 That’s strike one; strike two is a shadow matchup with Jalen Ramsey. The newest Ram hasn’t displayed the same air-tight coverage this year as he battles through a back injury, but he’s still among the best.

Considering that Brown hasn’t had more than four targets in any game since returning, he’s going to need an uber-efficient outing against Ramsey to go over this mark of 3.5 catches At 100% health? Maybe. At anything less, and taking plus odds on this prop is certainly a plus-EV play.