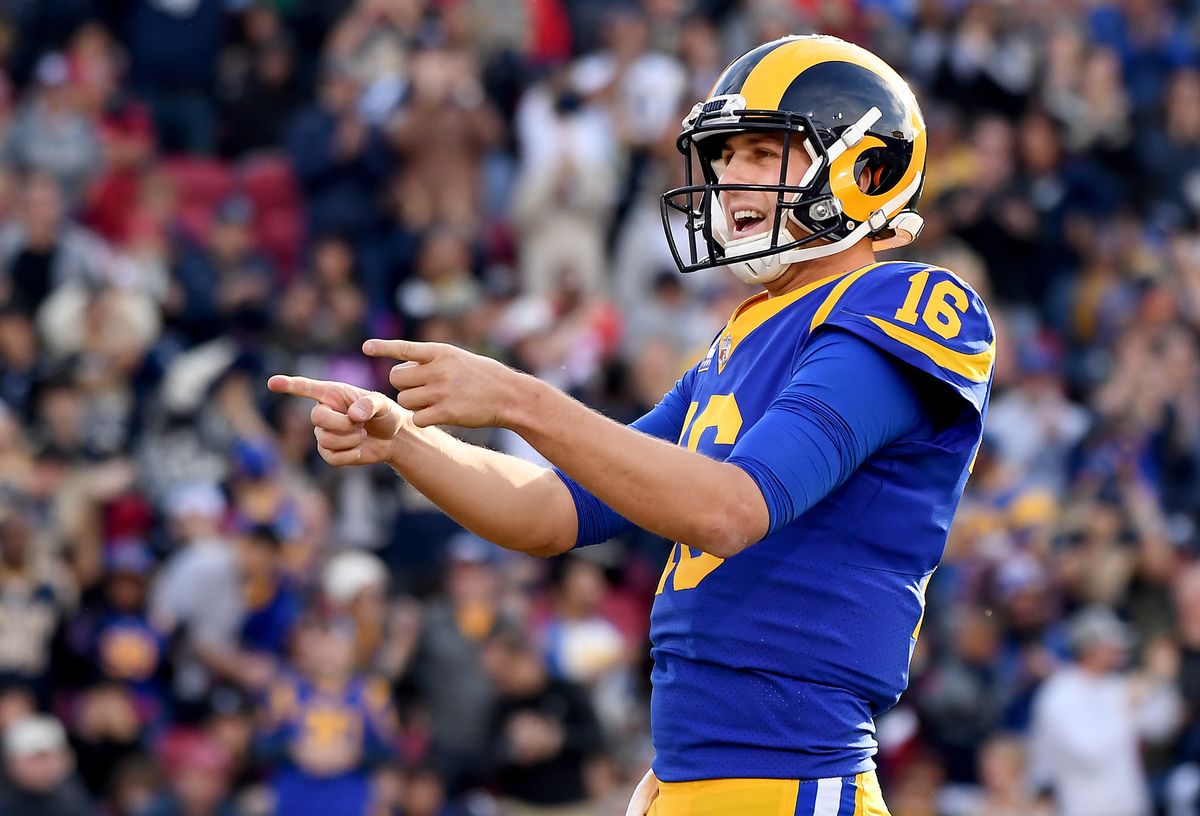 Picking apart the best Cowboys Rams prop bets for division weekend is made a little easier by looking to the Vegas lines.

As they rank bottom of the barrel among the remaining playoff teams in both yards per play and yards per attempt, the Cowboys are a deserved 7-point underdog heading into Los Angeles. That sizable line will factor into two of our three plays.

Don’t expect too much pace in this one — the Rams allow the third-fewest plays per game and the Cowboys the seventh fewest.

Also be sure to check out our analysis of the Colts Chiefs matchup, as well as a few of our favorite head-to-head props.

The spread and the reduced passing volume expectations that come with it certainly play into this pick.

Jared Goff has averaged 31.5 attempts in the six games the Rams have won by at least 5 points compared to 41 attempts in all other games.

If the Rams do indeed win by sizable margin, expect their pass volume to be capped as a result.

Todd Gurley looks to be back to full health, and the Rams run the ball much more often in victories:

This angle has everything to do with recent volume.

The line is undershot largely in part to Everett’s one-target, zero-catch outing in the Rams’ half-effort Week 17 win. Throwing out that game suggests this pick is a slam-dunk.

What makes this spot even juicier is the Cowboys’ vulnerability to the tight end position.

Although overall passing volume looks low for this matchup, Everett’s recent usage is too far above the betting line to make this anything other than a must play.

I would play this up to 3 receptions but would look towards the 25.5 yards if the juice grows higher.

Opportunity is what drives this bet.

Gallup, the rookie out of Colorado State, has seen his usage increase in the second half of the season.

By these numbers alone this 2.5 reception line appears fair, but digging deeper reveals the value.

Beasley and Jarwin’s potential absence or limited usage is bad news for the Cowboys but great news for Gallup. Beasley and Jarwin have combined for more than 10 targets per game for the last five games. Given that Gallup’s usage has continued to grow, expect him to see more looks if some of his fellow pass-catchers are not in action.

Amari Cooper faces a matchup versus Rams cornerback Aqib Talib that has historically gone exceedingly poor for him.

Cooper is on heavy fade alert for this slate. As I write this, his Under 5.5 receptions is juiced all the way to -160, so I am staying away until another line opens up at a different book.

Instead, I see Cooper’s potential ineffectiveness as an opportunity for Gallup in a game the Cowboys are projected to be trailing.

The juice is heavy, so shop around on this one, but I’d play the over on lines up to 3 receptions.