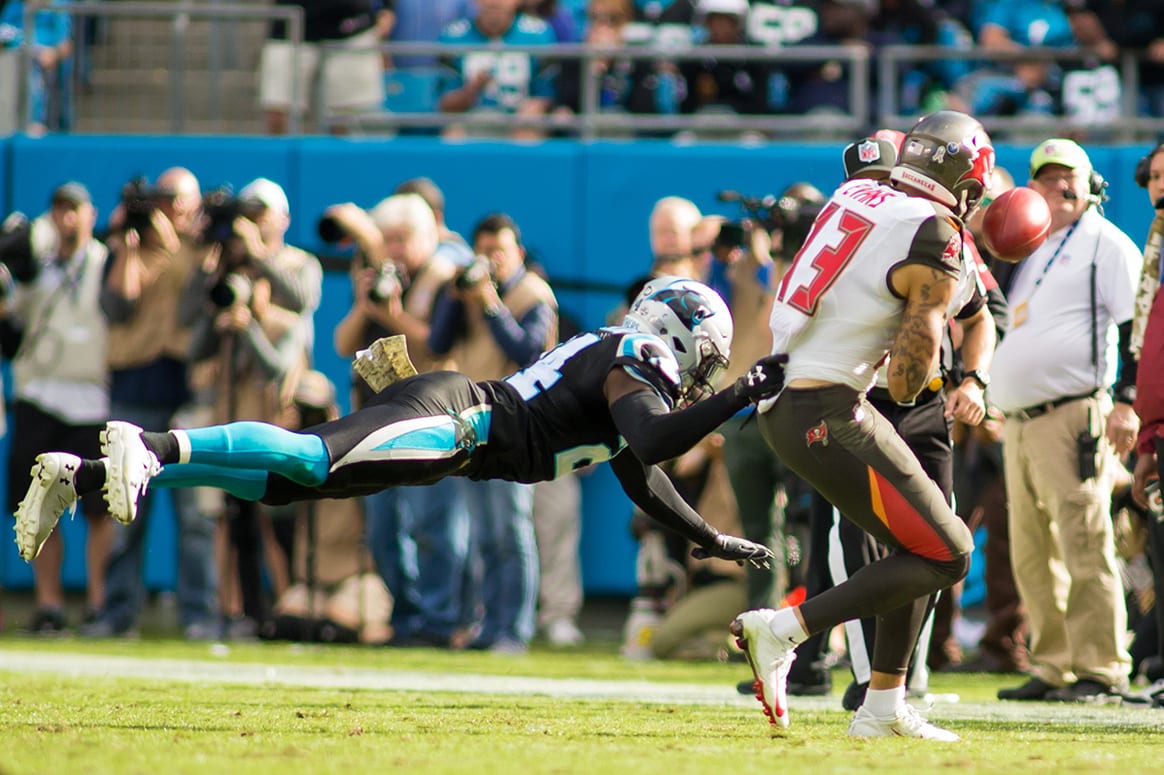 Our best Buccaneers Panthers Props for Thursday Night Football features one of the best in the game in Mike Evans, a straight-up monster who's apparently been slowed by the flu to start the season.

Add that to some other ominous signs we'll get into, and you have the potential for another quiet game.

The rest of the value appears to have been sucked out of this card, so like we did last week when we went a perfect 4-0 on picks and leans, we'll give you two of our best leans to go along with this official play on Evans.

We hit on 65% of our props in Week 1, including this 3-0 WR card on Sunday, and we're helping to build our subscribers' bankrolls. Join us for as little as $5 a week.

Evans was out-targeted by Chris Godwin 6 to 5 in the opener against the 49ers, and the matchup for the latter is more difficult tonight.

In his last five games vs the division-rival Panthers, Evans has lines of:

Plus-sized CB James Bradberry is faster than Evans (4.45 vs 4.53 40-yard dash times) and has proven to be a problem for the big fella , who is used to physically dominating smaller corners.

Mike Evans has a tougher matchup than you think tomorrow. Last year against the #Panthers he caught 1 of 10 targets in the first game, and had 4-48 in the second. @Brad_B21 is extremely underrated. If Evans has a below average game, he’s a perfect buy LOW candidate in any format! pic.twitter.com/yWxl9uf0eY

Bradberry was back at it again to start the season, earning a 90.5 grade from PFF while helping to limit outside WRs Brandin Cooks and Robert Woods to 109 combined yards.

That was Ryan Fitzpatrick chucking those 10 targets (for one reception) to Evans in that last matchup. Tonight it will be Jameis Winston under center, but as it turns out, he's proven to be a bit of a drain on the WR's game -- Evans averages 1.32 adjusted yards per attempt less with Winston than any other QB he's played with.

Over the last two seasons (including last week), Evans is averaging 78 receiving yards with Winston under center and 86.29 yards without. It's also debatable whether or not he's even Tampa's most effective WR right now -- in his career, Godwin's adjusted yards per attempt on Winson passes is 9.15, well ahead of Evans at 7.43.

As we talked about in our look at our best fantasy prop for this game, the Panthers beefed up their pass rush in the offseason, registering three sacks vs Jared Goff on Sunday. Per PFF, Winston was 4 of 12 for 37 yards and 2 picks when under pressure last week. Winston needs to get the ball out quickly, and that bodes better for Godwin's lower average depth of target -- 11.9 to Evans' 15.7 in 2018.

Throw in the fact that Evans is playing on a short week after battling the flu over the weekend, and there are multiple reasons to be concerned with his potential output tonight.

Leans are unofficial plays for people who want a little more action on primetime games. I've bet these personally, but don't have sufficient confidence to make them official plays.