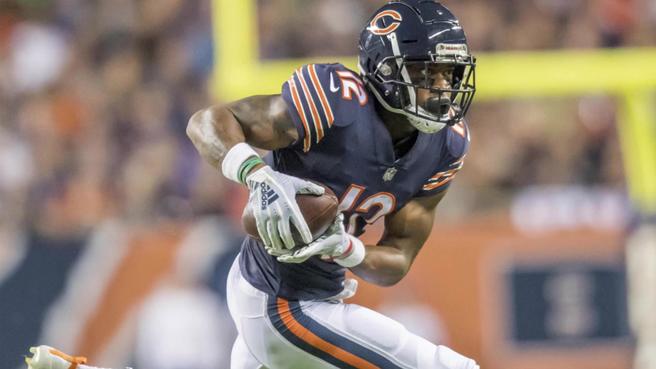 Monday Night Football caps off a week full of explosive performances, and we’re breaking down the best Bears Redskins props for the occasion.

Washington’s relative effectiveness as an offense is a mild surprise, while Mitch Trubisky’s Bears are among the biggest disappointments in the early going. Both of those trends will factor into our prop play and leans for tonight.

We’ll just have the one official recommendation for this card, as forcing bets isn’t our style. However, as usual when our official card is a little light, we’ll once again throw in a few +EV leans for those who want a little more action in primetime. Our article leans are 7-3 on the season after finally falling flat last Thursday.

Meanwhile, our subscriber picks are in the midst of a third-straight winning week with a 15-8 record heading into MNF. We’re batting well above average at 65% on the season so far, and it’s not too late to join us for just pennies per pick.

Mitch Trubisky’s Bortles-esq start to 2019 is enough to scare anyone off of the Bears passing game, but the good news for Robinson is that he owns a disproportionate share of “attack” they do bring.

The Bears QB has attempted 72 pass attempts through two games, and 20 of them have been directed towards Robinson. That 28% target share is tied for eighth-best among all WRs coming into the week, sandwiched between Odell Beckham and Davante Adams. Trubisky isn’t even considering any other WR options when he makes his progressions — it’s Robinson or bust. Taylor Gabriel has the second-highest WR target share at 12%, while sophomore Anthony Miller has become an afterthought with just 2 total targets on the year.

Going back to last season, Robinson has demonstrated an extremely safe floor with at least 7 targets in eight of his last nine — or nine of 10 if you include his 13 targets in last year’s playoff game. 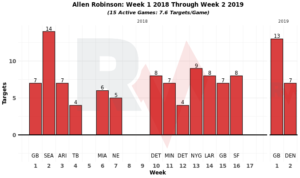 The Bears wideout is coming off one of the toughest matchups he’ll face all season, with Broncos’ Chris Harris shadowing him around the field. Still, he managed four catches against the All-Pro corner, the same number that world-beater Davante Adams managed against Harris on Sunday.

Tonight he’ll get the shadow treatment from Josh Norman. That would have been a concern a few years ago, but Norman has slipped of late, allowing catches on 68% of pass attempts sent his way and earning a mediocre 68.5 grade from PFF.

In total, Washington allows opposing QBs to complete passes at a 78.3% clip, the worst mark in NFL.

Expect a plethora of high-percentage completions again tonight. The Bears don’t use Robinson as a field-stretcher; they make a concerted effort to feed him easy looks, with the vast majority of his targets coming at a depth of 0-8 yards. 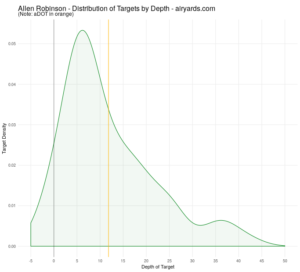 Washington’s offense is better than we thought, ranking a middle-of-the-pack 5.8 yards per play, better than the Eagles (5.2) and Bucs (5.5). So while I’m not expecting much from them against an elite Chicago defense tonight, they’ve been reasonable, and with a 4-point spread discounting the chances of a blowout, Robinson should remain part of the game plan.

Leans are unofficial plays for people who want a little more action on primetime games. I’ve bet these personally, but don’t have sufficient confidence to make them official plays, especially not in this matchup.

Treat these Bears Redskins props as entertainment and play them at your own risk.

While I get why the number has been set here, it’s a little disrespectful to the WR who has amassed the second-most Air Yards among all receivers coming into the week.

We explored Air Yards and why they matter over the weekend in successfully identifying DeVante Parker as the most undervalued asset on the prop market.

Second on that list? McLaurin, who is averaging 138.5 Air Yards per game, 85 yards clear of his receiving prop line.

This methodology is by no means a fail-safe, but it does demonstrate the rookie’s strong value in the market. He leads the team in all receiving categories, and with Washington projected to be trailing and in tough against the Bears run defense, expect to see McLaurin be a major part of the gameplan again.

The Bears gave up the fourth-fewest rushing yards to opposing RBs last year (65.3 per game) and rank second so far in 2019 with 129 total rushing yards allowed through two games.

This is a low number for Peterson, sure, but he is among the most game-dependant RBs in the league, with his attempts and yards plummeting anytime his Redskins are underdogs of four points or more. 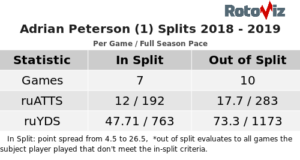 We saw more of the same last week when he had just 10 rush attempts while playing from behind against the Cowboys. Even if he can find 13+ totes tonight, he’s in tough against this monster front from the Midway.