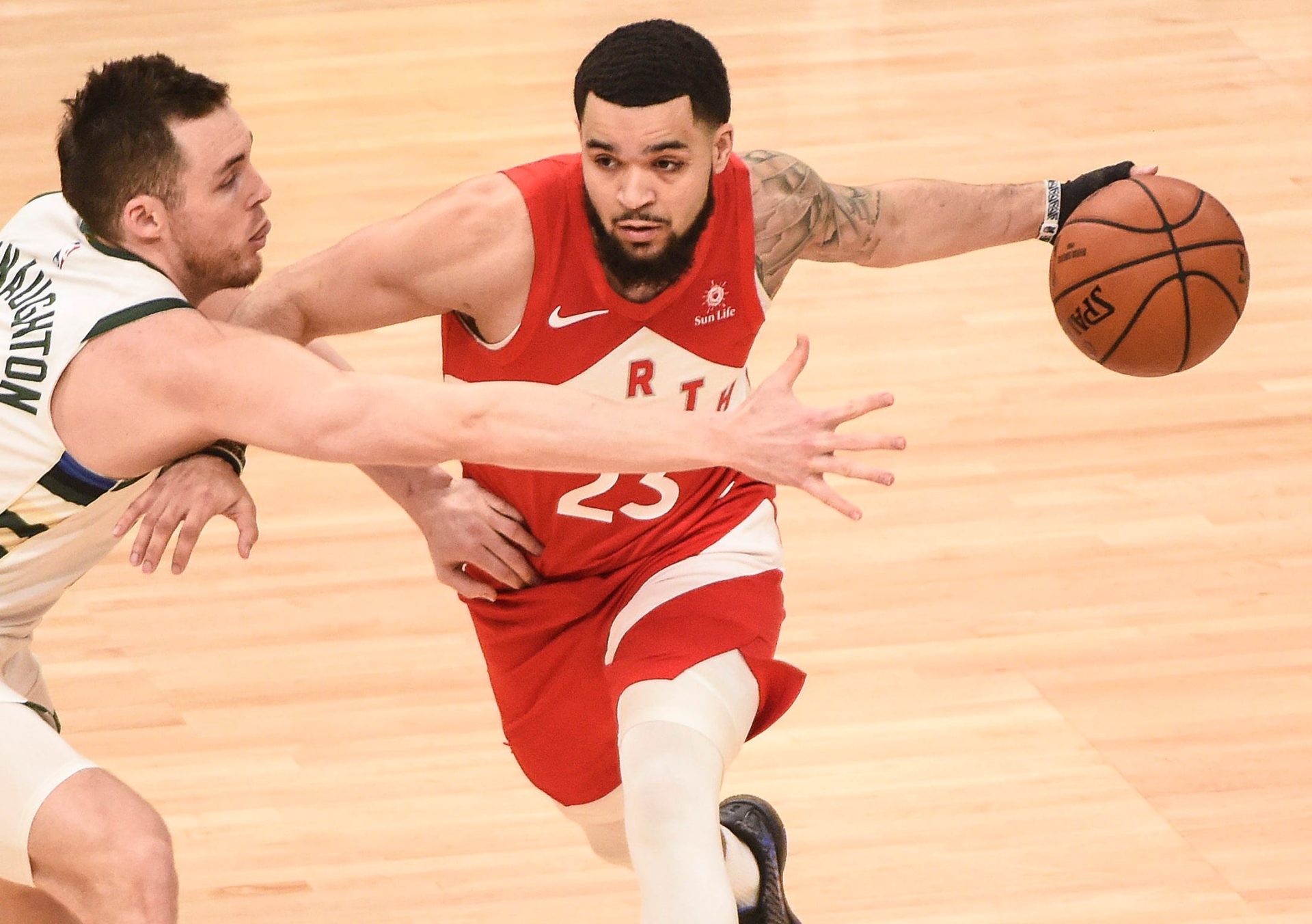 The NBA was good enough to bless us with 14 NBA games on this Thanksgiving Eve, so you know we’ve got a few free NBA props lined up for you.

With this much action, if you do play more than the recommended plays, then I would suggest game-stacking as much as possible.

The goal is to eliminate games with low totals and high spreads, and target games with close spreads and high totals, even when targeting under plays. Why? Games that are competitive have much less variance in them and the outcome is easier to predict.

Who fits that build for us tonight? Fred VanVleet, Malcom Brogden, Collin Sexton, and Kemba Walker. They all find themselves in close contests and with decent spreads. VanVleet has been great for us recently, and he is our feature play tonight.

VanVleet has been great while taking over starting PG duties for the injured Kyle Lowry. VanVleet is averaging 18.5 PPG but has averaged 24.5 PPG over his last three and has hit the targeted 19.5 points in five of his last six.

His matchup against the Knicks is a friendly one for PGs. Over the last two weeks they’ve been torched by the position, giving up an average of 27.1 PPG

What makes me feel confident in VanFleet tonight is that he is currently playing the second-highest minutes per game in all of the NBA.

With everyone getting the day off tomorrow, you can expect him to continue his scoring pace, in a great matchup with max minutes.

The Pacers and Brogden get a home game against the Utah Jazz.

On paper, this looks like a game we want to avoid. A low total (210.5) and a projected slow-paced game. However, the Jazz are getting beat up by opposing PGs, and the market has priced Brogden down for this matchup.

Over the last two weeks, the Jazz have allowed opposing PGs to average 24 points and 9.6 assists per game. Another key factor is that defensive player of the year candidate and shot-blocking machine Rudy Gobert is doubtful for this game, which opens up the entire paint for dribble drives.

Brogden is averaging seven PPG in the paint this year, which is higher than many post players like Kristaps Porzingis and Al Horford. Gobert being gone really opens up the lane for Brogden.

Brogden has quietly become the leader of this Pacers team. He has averaged 31 PRA per game over his last three contests and will be locked into solid minutes tonight in a matchup that we shouldn’t be afraid of.

Sexton has been a solid contributor for the Cavs so far this season. He is averaging 17.8 PPG and has hit the targeted 17.5 points in three out of his last four games.

The lowest point total Sexton has scored in the last 11 games has been 14 points.

He is playing 30.4 minutes per game and is shooting over 16 shots per game, including 22 shot attempts his last game out.

The Cavs get a matchup tonight against the Orlando Magic, who are really bad defensively without starters Aaron Gordon and Nikola Vucevic, and over the last two weeks they are giving up 25.6 PPG to opposing Shooting Guards.

Sexton should be able to get his shot off at will tonight against the Magic, and with his solid scoring floor, we’re getting great value in a competitive matchup.

Walker is returning from injury tonight and gets a home matchup against the Brooklyn Nets. The Nets are usually someone we want to exploit defensively, especially against Kyrie Irving. However, they’re again without Irving, as they have been for the last six games.

During that stretch the Nets have stifled opposing PGs to the tune of 17.2 PPG.

Spencer Dinwiddie is a much better defender and his defensive rating in the last six games is 100.4, which is equal to Boston Celtic’s Guard Marcus Smart, who is a reigning all-defensive team member.

Walker is returning from a really scary collision that left him with a concussion. The team is calling it a minor injury, but Walker was stretchered from the court. I’m sure Walker is fine now, however, the matchup is much more difficult on paper.

I expect Walker to continue to struggle tonight against a Nets team that ranks 8th in the league defensively over the last six games with Irving off the floor.