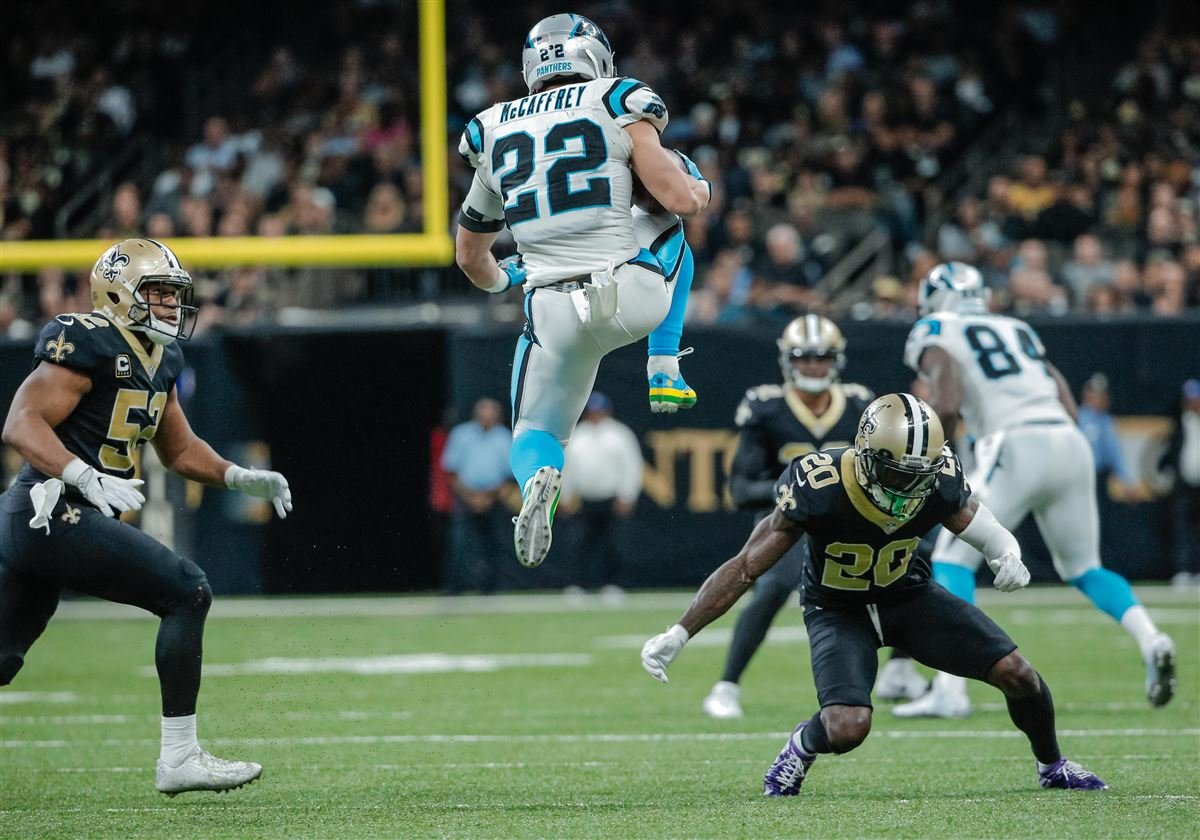 This Saints at Panthers affair is one of those matchups where there are seemingly good angles everywhere you look.

A big part of that is the the Jekyll and Hyde nature of the Saints offense — elite at home, mediocre on the road. We’ll dig into that trend a little more as we analyze our favorite props for this game.

But we start with the man who would power the Panthers attack tonight — the best receiving back in football.

I did not wake up today expecting to be offered plus odds on McCaffrey’s receiving line with a figure south of 60, but here we are.

It is a big number for any RB, even one who is on pace to break Matt Forte’s single-season record for RB receptions, but:

Only one RB has surpassed 56.5 yards against the Panthers this year – Saquon Barkley went for 80 – which somewhat explains the plus odds on offer.

However, keep in mind that the Saints yield fewer rushing yards than any other team with just 53 per game. So if the Panthers want to keep McCaffrey involved, they’d be wise to do it via the RB passing game, where the Saints are a much more pedestrian 12th in yards permitted to opposing backs.

McCaffrey has another huge box ticked: he ranks number on on Josh Hermsmeyer’s predictive Air Yards buy-low analytics model. Number two on that list this week? DeAndre Hopkins, who had 170 yards on 10 catches.

We’re double dipping on a player who boasts some of the most dramatic home/road splits in the league.

The Saints rookie only has six total catches in five games away from the Superdome, and all of those came in two outings; in Smith’s other four road games, it’s been zeros across the board. 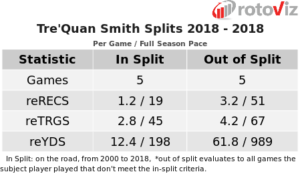 Over the last two weeks, Smith has two targets combined.

We’re also tacking on the receptions prop at an over/under of three, as Smith has three or fewer receptions in 11 of 12 games this year.

If the Saints suddenly start feeding the rookie out of nowhere, so be it, but these trends are extremely encouraging.

Brees has always been much better at home than on the road, and that trend has spilled over into this year.

He’s passed for a paltry 220 yards in games away from the Superdome. 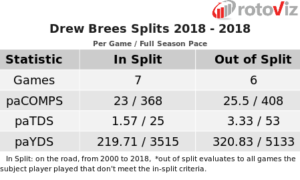 The TD totals tumble alongside the yards with an average of just 1.6 this year. Brees has only topped three scores on the road twice this year, and both came against the putrid pass defenses of Cincinnati and Atlanta.

In Drew Brees’ last seven games in Carolina, he’s averaging 1.7 TDs and has only once thrown for three scores.

We love this game from a prop betting perspective and are likely to add another pick or two heading into kickoff. Be sure to follow us on Twitter so you don’t miss any of the action.