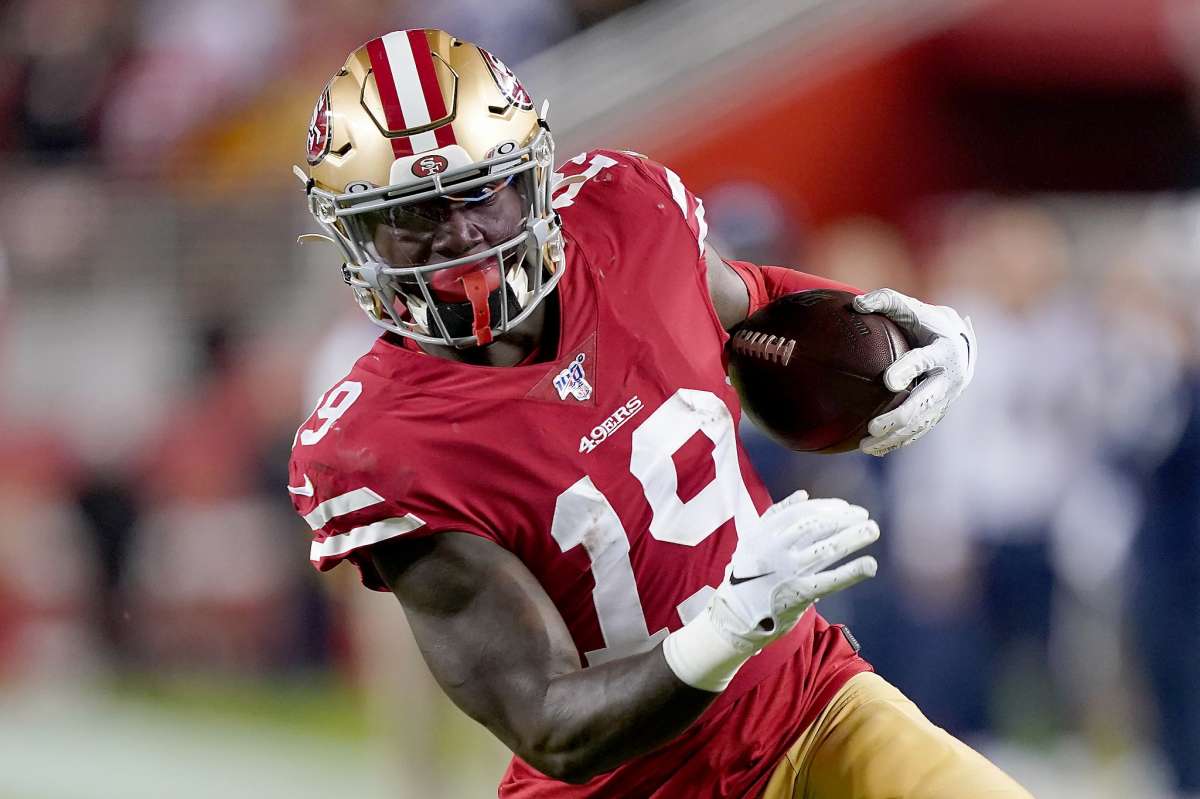 We’re giving you a little bonus coverage when it comes to props for Rams 49ers tonight. Consider these plays “leans” for a half-unit each (0.5% of your total betting bankroll).

We actually have one official play locked in for our subscribers already, but that was a pretty bad line that was gone quickly. If you want the sharpest prop bettors in the industry watching markets for you around the clock, join us here.

Working his way back from an offseason foot injury, Samuel played 34% of snaps in his first game back before returning to full-time status on an 89% snap rate last week.

The sophomore paced the team in targets (eight, tied with George Kittle), but the bottom line didn’t look great, as he caught just two for 19 yards.

But catching the ball was Samuel’s calling card as a rookie — his 70% catch rate was sixth-best among all qualified WRs last year, ahead even of guys like DeAndre Hopkins and Keenan Allen.

Samuel has excellent hands and runs high percentage routes. He had six games in which he was targeted six or more times last year, and he went over our line in all of them.

Expect him to be more efficient with his targets going forward, and in a near must-win divisional game, look for Samuel to be involved again tonight.

On the flip side, Bourne’s been placed on the backburner a bit.

His snap counts have fallen in each of the last two weeks to make way for his more explosive running mates — Samuel, and rookie second-round WR Brandon Aiyuk. 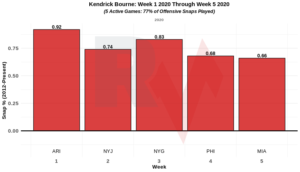 Bourne was actually tied for second in target share (17%) through the team’s first three weeks. But that target share sunk to 11% last week, as Kittle, Samuel, & Aiyuk all hit full health and win their shares back.

Note: This was an official play for our subscribers at U40.5 yards but is downgraded to a lean now that it’s moved. If you’re serious about making money on player props, we can’t stress enough how important it is to hit these markets early. And if you don’t want to be the one to watch markets 24/7, that’s what we’re here for.

What a change a year makes. Higbee was unstoppable to end last season — from Week 13 on Higbee led the entire NFL in receiving, averaging 5.4 receptions for 104.4 yards per game.

This year? He’s in a three-way TE rotation averaging 3.4 targets per game. 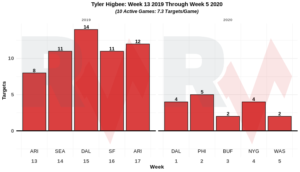 He’s actually been efficient when called upon, but Higbee’s pass routes run rank just 30th at the position, and he’s impossible to count on until further notice.

The 49ers are banged up on defense but have always been tough on TEs, holding them to the eighth-fewest yards this year after ranking first against the position last year.