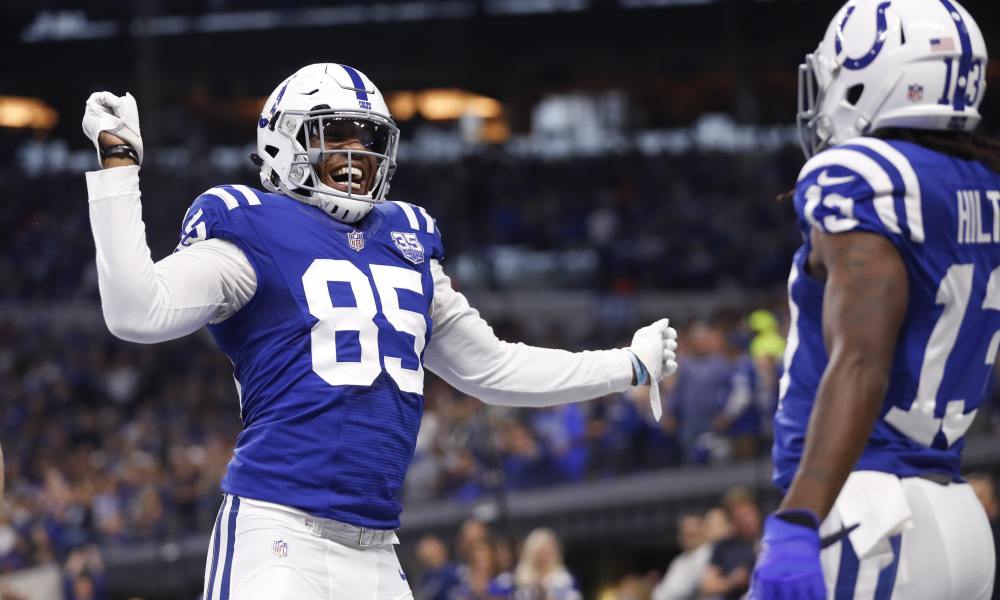 The playoffs kick-off with a heated divisional rivalry between the Colts and Texans, and we’re breaking down wildcard weekend starting with the best Colts Texans prop bets.

The Deshaun Watson-led Texans opened as a 2.5 point favorite but have since been bet down to just -1, a reflection of the Colts’ late-season surge.

Comeback player of the year favorite Andrew Luck has rocketed his team to victory in nine of their last 10 games following a rough 1 – 5 start to the season.

When these teams met for the first time in Week 4, the Texans prevailed in a high scoring 37-34 overtime thriller that featured 774 yards of passing offense. The surging Colts got the better of the Texans most recently, when Luck threw for 386 yards with 9.4 yards per attempt for a 24 – 21 road victory. Watson was quiet in that most recent affair with only 226 passing yards.

Slotted to be the most exciting offensive affair of the wildcard round, this AFC South battle is sitting at a total of 48.5, the highest of the weekend by a decent margin.

Given the history of this matchup, expect both teams to come out guns blazing – opening the door for prop bet overs to cash out.

Click here for the top props from the Seahawks Cowboys matchup, and we’ve got the best Monkey Knife Fight props covered as well.

Ebron has resurrected his career with the Colts this year. With Jack Doyle frequently injured and then put on injured reserve after Week 11, Ebron has seen phenomenal volume in a pass happy offense.

There is potential for Ebron’s volume to spike even higher this week, too, given the matchup and personnel constraints of the Colts.

The Colts’ entire receiving core is on the injury report this week.

No. 1 WR T.Y. Hilton has been playing through an ankle injury the last few weeks which coach Frank Reich described as serious enough that Hilton would’ve sat out had the team’s last two games had they not needed to win out.

Indeed, Hilton looked hobbled at times in last week’s affair with the Titans when he went down untouched after skipping gingerly down the field on a breakaway catch. It sounds like Hilton will play no matter what, but he certainly will not be his normal self, which opens up Ebron’s target upside.

Tertiary receivers Dontrelle Inman and Ryan Grant are also dinged up. Inman has battled through a shoulder injury in recent weeks so he is expected to be a full-go, but Grant’s new toe injury is expected to keep him out. Although Grant has seen only seven targets over the last three weeks, his absence still plays in Ebron’s favor.

Things really get juicy for Ebron from a matchup perspective, as the Texans are one of the worst teams in the league at defending tight ends and the pass in general:

Ebron has at least four catches in four of his last five healthy games (he was concussed early in Week 15) and is a strong bet to surpass that total this week given his overall volume profile and the matchup.

This line has already been juiced a bit, so I would sit tight and pass if it moves any further, but I am excited to play it at over 4 receptions (-130).

The Colts learned how to best utilize Hines late in the season and integrated him into a full-time receiving role. A prolific pass-catcher in college, Hines has thrived and proved a dynamic piece of the Colts’ aerial attack.

Via the RotoViz Game Splits App, it’s easy to see how Hines’ volume and production over the last five weeks make him a sure bet to hit the 25.5 receiving yards line.

Houston has shown slight vulnerability to receiving backs, as well, as they’ve surrendered the 13th-most receiving yards and 11th-most catches to enemy backs this season.

An important factor to consider for the Ebron and Hines props – and the third prop below – is the brick wall Houston has for a run defense.

Expect Frank Reich to install an even pass-heavier game plan than usual given his team’s complete inability to run the ball effectively in the prior two games.

An inflated pass-tendency plays right into the Ebron and Hines props.

Mack did not play in Indianapolis’ Week 4 tilt versus the Texans, but he was shut down in their Week 14 battle to the tune of 33 rushing yards on 14 carries.

In addition to the matchup being dreadful from an efficiency perspective, Mack’s volume is in question, as well.

In a game that projects as a neck-and-neck battle with just a one-point spread, expect the Colts to lean heavily on the pass – especially given their inability to run the ball versus Houston previously.