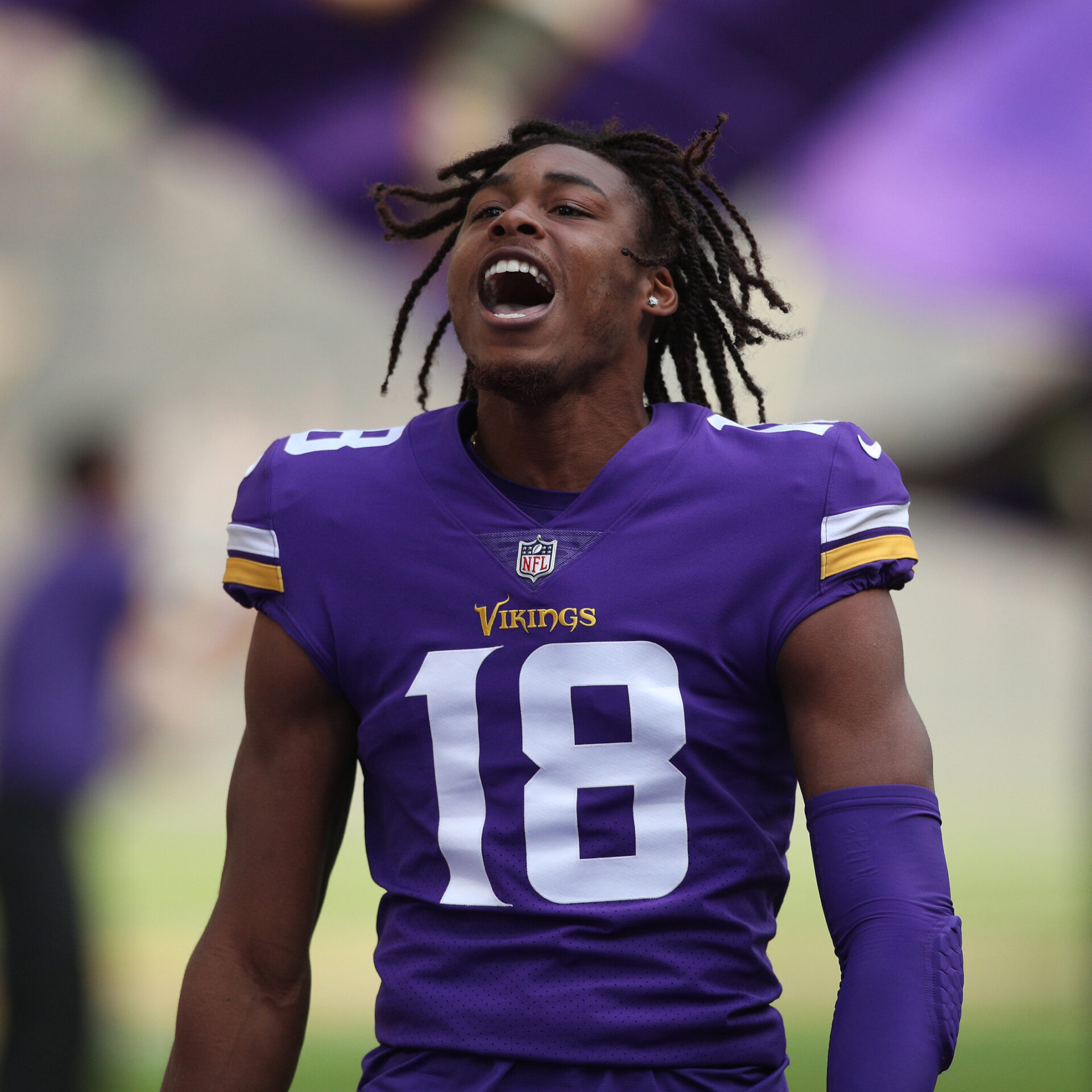 The start of the 2022 NFL season is only a week away! So, we have one week to place our favorite NFL Futures Picks before the 2022 season officially kicks off.

Today, we’re going to dish out some of the best values on the market within the wide receiver position. We have a fantastic mix of some over/unders and some long shots, so let’s dive in!

Join us for the entire season and save 20% on our Early Bird Special.

In case you couldn’t tell, I love Justin Jefferson this season. He’s entering his third professional season and is coming off of the best start to a career of any receiver in league history. Jefferson’s 3,016 receiving yards are the most ever through two years in the NFL.

JJ amassed 1,400 yards as a rookie in 2020 and 1,616 yards in his sophomore campaign last year. He’s averaging 95.1 YPG since becoming a starter in Week 3 of his rookie season, trailing only Davante Adams for the top spot during this stretch.

Furthermore, the arrow is pointing up in a major way for the LSU product in Minnesota’s new-look offense. The Vikes have thrown only 33.9 passes per game over the last two seasons under former head coach Mike Zimmer. This ranked 18th in the league. Now, enter former Rams offensive coordinator Kevin O’Connell as Minnesota’s new man in charge. The Rams threw 36.3 passes per game in two years with O’Connell as their OC, good for 9th most in the NFL. In a new up-tempo system, the sky is the limit for the 23-year-old playmaker.

Jefferson likely only needs to play 14 games to top the 1,350 over/under. And, without any documented durability issues, staying healthy shouldn’t be an issue for him. And as for the 9-1 play, JJ’s over/under is listed higher than anyone else’s. His yardage total is listed as 50 yards higher than Cooper Kupp‘s and at least 100 yards higher than Davante Adams and Ja’Marr Chase‘s totals. Jefferson already has a strong connection with Kirk Cousins, and in a system that projects to feature more passing than past Vikings squads, he is a screaming value to win the 2022 receiving crown.

The Falcons selected Drake London with the 8th pick in this year’s NFL Draft. Measuring 6-foot-5, London is a freak athlete with sure hands. And, he’ll be locked into a huge role immediately. His primary competition for targets in the Atlanta receiver room comes in the form of Olamide Zaccheaus and Bryan Edwards. Zaccheaus had 406 yards in 17 games last season, while Edwards posted 571 in 16 games. London’s role is more than safe for his first season, and that’s baked into his outlook compared to other rookies.

Here’s his season-long consensus over/under compared to other first-year wideouts:

Of all players listed, London’s line is the highest. And, with the Falcons projected as one of the NFL’s worst teams this season, there should be plenty of pass-heavy game scripts ahead. The only question for London is health. But, if he plays a full season (or close to it), he just might run away with this one.

Yes, I’m aware the Broncos acquired Russell Wilson this off-season. Sure, Tim Patrick will miss the entire 2022 season with a knee injury. But, these changes shouldn’t automatically turn Jerry Jeudy into a touchdown machine.

WR Courtland Sutton and TE Albert Okwuegbunam profile as Russell Wilson’s two most likely red-zone targets. That leaves Jeudy, KJ Hamler, and rookie TE Greg Dulcich as other receiving threats in Denver’s offense. And, of course, the team’s backfield combo of Javonte Williams and Melvin Gordon. In other words, there are a bunch of Broncos skill-position players that will contribute in 2022, and it would be a surprise to see Jeudy account for at least 20% of the team’s scores through the air.

The Alabama product has scored only 3 touchdowns in 26 career games. He had a 19.9% target share in 2021 and a 21.2% target share in 2020. However, his red-zone target shares were only 9.4% and 12.3%, respectively. Denver’s new coaching regime would have to make some earth-shattering changes to get Jeudy a consistent stream of looks in scoring position this season.

Additionally, Wilson has already developed quite a strong connection with Courtland Sutton. All reports out of Broncos camp have stated that Russ has gravitated toward Sutton more than anyone. This hierarchy in the WR room could be bad news for Jeudy’s outlook, especially in the TD department, where he’s never succeeded in the past.

There’s some tremendous value on Justin Jefferson, who’s emerging as one of the NFL’s premier weapons. Meanwhile, we’re targeting Drake London and Jerry Jeudy props within the league’s wide landscape of young receivers.

Enjoy playing these NFL Futures Picks and Join us for the whole NFL season!