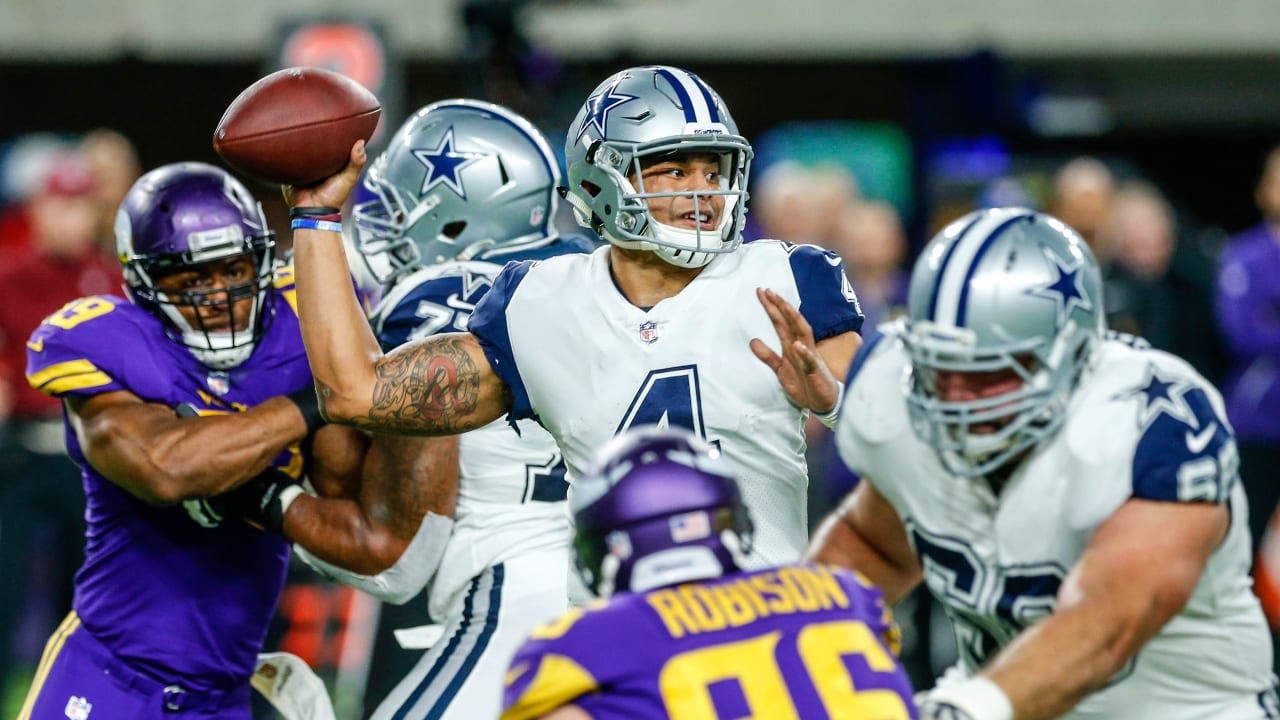 While Dallas has scored 37 points in back-to-back wins versus the Eagles and Giants, the Vikings had a four-game win streak snapped by the Chiefs in Week 9 and will be looking to bounce back on the road.

After a start to the season that saw the Vikings averaging just 169 yards through the air in their first four games, Stefon Diggs and Adam Thielen were able to convince Mike Zimmer to air it out more and the team averaged over 300 yards in their next four before being stymied by the Chiefs. With Adam Thielen sidelined and facing a stout Dallas defense on the road, will the Vikings return to their run-heavy ways?

We’re looking to build on a profitable first half of 2019.

With Thielen already ruled out for Week 10 and Stefon Diggs only accumulating four yards on four targets last week, surely the Vikings defacto WR2 must have seen heavy usage, right? Aside from an eight-target outburst against a woeful Lions secondary in Week 7, Olabisi Johnson has yet to eclipse four targets in any game, including games that Thielen has missed. Things won’t get much easier versus the Cowboys either, who have allowed the 27th-fewest receiving yards to wide receivers over their past five games, despite allowing an offensive outburst to the Jets.

What might hold back Johnson the most though, isn’t the other team, it’s the coach on his own sideline. Zimmer came out of last week’s loss bemoaning the fact that they threw the ball too much early in the game. Make no mistake, this is a coach that wants to run the ball as much as possible. Though the Dallas defense is strong in both phases, the Vikings have no real incentive to throw the ball unless game script forces them to.

When Kirk Cousins was throwing for big yardage in the stretch before the Chiefs game, it all came against defenses that were towards the bottom of the league against the pass. Outside of those contests against the Giants, Eagles, Lions, and Washington, Cousins has a high of just 233 pass yards in his other five games.

There’s no reason to expect the volume to be there for Johnson, and he’s only exceed this yardage total twice this season. Bet on Bisi to stay Under this week too.

He may be old and slow, but Jason Witten has actually had a better-than-expected season for the Cowboys thus far. In fact, he’s averaging 40.5 receiving yards per game and is coming off a 9 target, 58-yard performance versus the Giants. So why fade Witten here when he’s gone over this total in half his games?

Witten’s good games have all come in matchups versus teams that have struggled to defend the TE. Meanwhile, Minnesota has faced one of the toughest slates of TEs over their first eight games,[1]Austin Hooper, Darren Waller, Evan Engram, Zach Ertz and Dallas Goedert, and Travis Kelce have all faced the Vikings so far. and yet has given up the fourth-fewest yards per target to the position.

This Vikings team is just 24th in situation neutral pace, and they will look to keep it on the ground for as long as the game is competitive, chewing up clock and denying high play totals for both teams.

Expect that Witten will get the four targets that he seems to get just about every game, but that he won’t be able to do enough with them to go over his total here.