NFL Divisional Weekend props are here, and overs are apparently the hot ticket. I’ve never seen such lopsided boards with so many unders offering plus-money. We’re picking our spots carefully, but I suspect a strategy involving a lot of unders in the +110 to +140 range would be a profitable one today.

We like these NFL Divisional Weekend prop plays, but edges are certainly thinner in the playoffs, you can consider these two plays “leans” for .5U (0.5% for your bankroll).

For this edition, we get some help from BTP’s newest contributor Alex Selesnick (aka @PropStarz), who’ll wrap up our Divisional Weekend props with a play on Sanders, as well as mine on Mahomes.

We’re looking for redemption after a miss on JK Dobbins Saturday, so let’s finish off the weekend strong.

Mahomes is averaging 26 completions with a median of 25 while going over this line just 33% of the time.

The Browns allow 23 completions per game while holding their opponents to 58 total plays per game, which is tied for fifth-fewest in the league. They’re actually tied with KC in that category, so the overall play volume here should be modest.

The Chiefs are 10-point favorites. Unless this game gets way off script, Mahomes is unlikely to be pushing a 28-completion pace. Over the last two years, he’s averaged 24 completions in games that the Chiefs were favored by -7.5 or more. 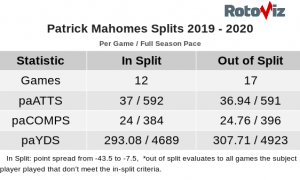 Even in games projected to be closer than the -10 projected here, he still averages fewer than 25 completions.

This is just a massive playoff bump for the biggest star in the game, and we’ve got to try to capitalize.

In what projects to be a potential shootout between two NFC South rivals, it’s actually an under that has my attention. Sanders has certainly been a welcome addition to the Saints passing attack, but he’ll face an uphill battle for targets.

While the return of All-Pro Michael Thomas couldn’t have come at a better time for the Saints offense, it largely comes at the expense of Sanders, who provided drastically contrasting per-game splits in the regular season with Thomas in the lineup. 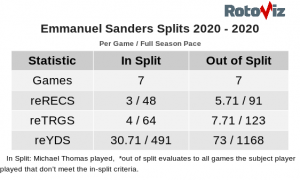 The diverging splits were on full display in wildcard weekend, as Sanders mustered only two receiving yards on three targets.

The Saints could also be welcoming slot receiver Tre’Quan Smith back to the lineup, as he was activated from I.R. and returned to practice mid-week.

His return further muddies up the waters which already include Thomas, Alvin Kamara, Jared Cook, and don’t forget about Donte Harris, who had seven receptions last week.

With the Saints receivers finally at full health, Sanders suddenly has a lot of competition for catches, making the under here a great look.